Deadline: midnight next Wednesday Nov. 4th
(but the earlier your image is rated, the better it will do)


STEPS:
(1) Go to each of the following galleries & rate the image (5 stars = best)
Add a critique in the comment (optional). Approx. 100 images per gallery.
Gallery 1 | Gallery 2 | Gallery 3 | Gallery 4 | Gallery 5 | Gallery 6
If your image is not in one of these galleries, follow these instructions.


(2) Use these criteria to rate the artwork.
(a) Candor (and/or) personal vulnerability (and/or) humor in answering "Why do you do what you do?"
(b) Relevance of imagery to the text.

How well are the words integrated into the image?
Do images/sounds offer additional layers of meaning to the overall message through contrast, irony or storytelling?
(c) Surprise & something unexpected
(d) Visual and/or audio creativity


(3) You may also invite friends to rate photos from outside of the class or school (optional)
> Send an invite here and you'll get notified when they sign up.
> Copy/paste this URL for them http://bit.ly/1gIEZc
> Tell them:
It is a great opportunity for people to be part of a worldwide community-art project that asks them to reflect on why they do what they do.

Notes:
>> Images must have at least 10 separate ratings to be considered.
>> Only images from the UCLA class will be included in the top 45.
>> BREAKDOWN: The top-15 highest rated submissions in each category (images, videos or audio) will receive extra credit. That means that 45 students will get extra credit. If there are fewer than 15 submissions in a category such as video or audio, the remaining slots will be reallocated to photos. As a result, a larger number of photos could receive extra credit. I'll post the results in below on Nov 5th.
>> Post questions below.

Replies to This Discussion

Permalink Reply by Tony Deifell on October 27, 2009 at 9:21pm
Danny Ma asked a great question about how people can comment on audio recordings. Unfortunately, the platform doesn't allow that in the same way as with photos and videos.

But, there is a workaround.

You can add your audio below a photo you submitted by doing this... 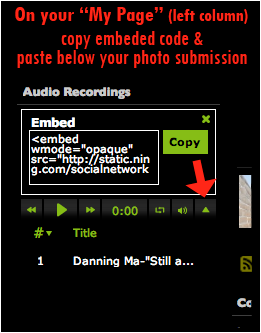 Permalink Reply by Tony Deifell on November 5, 2009 at 12:12am
Hello everyone... 25 of you are online now. Josh Garcia IMed whether the ratings were closed yet. I downloaded the list right after midnight and need to check them before posting (which I will do here in this discussion). Note: the leaders list dynamically changes, so if you check it before or after I downloaded it, the list will be different.

Great work you all! Every year, the work just gets better and better. I'm so impressed with what you all created.

Many students did multiple still images, which is awesome. I noted who these were among the top-45 list below. Also, Danning Ma and Michael Fan created all three types: a still image, video and audio recording!

In the end, the following 45 students (across categories) receive extra credit based on the guidelines we set up.


NOTE: the “Current leaders” list is dynamic. I downloaded the list just after midnight, so if you check it now, it will have a different ranking due to subsequent ratings.


Alexander Farkas (did a still image and audio)

Aram Namavar (did a still image and video)

(several other students who didn’t make the top 45 made multiple images too). That’s great class participation, if you ask me!)