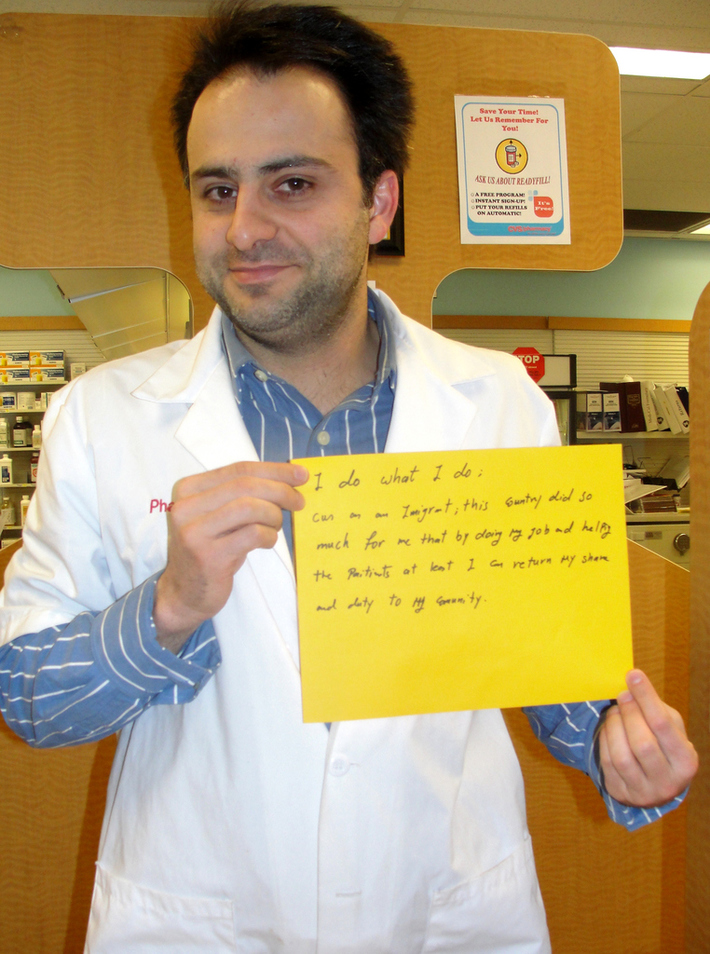 "I do what I do;
Cus I'm an Imigrant; this country did so much for me that by doing my job and helping the patients, at least I can return my share and duty to my community."

It was pretty interesting, but a little awkward stepping out of my comfort zone.  My friend and I headed into Westwood around lunchtime to complete the project, and we had quite the experience:

We saw this man sitting on a bench, he liked like a tourist, clean-cut, button down shirt, and jeans with a luggage bag.  We decided to approach him, thinking it was fine since it was mid-day at 2pm, and he didn't look threatening.  He turned out to be quite aggressive and we soon discovered he was homeless when he ate an m&m off the floor.  He tried asking us questions like what year we were at UCLA, and when we said we weren't comfortable giving that out he seemed fine.  But when I peered over to see his response to WDYDWYD, I saw that he wasn't only writing in English, but in code, and on the side he had drawn the Nazi swastika.  I immediately felt uncomfortable, thinking he was mentally ill and tried letting my friend know.  We decided to let him finish and get out of there as soon as possible.

He began speaking about things that made no sense, how he had 5,000 men stationed over international waters ready to make trouble etc.  By now I really wanted to leave, so we quickly thanked him for his answer, and snapped his photo.  He saw how anxious I was and growled to my friend, "Your friend doesn't trust me.”  Turning to face me, he accused, “are you Chinese?”  Creeped out, I denied it, but suddenly he came up real close to my friend and asked for a buck.  Wanting to get rid of him, she agreed, but he soon upped the deal to 5 bucks.  When she said she didn't have 5 bucks, he became intimidating, saying he would follow her to the bank to get the 5 bucks.  We looked at each other, and in a split second, we were running away.

It wasn’t over though, because he started chasing us, yelling “You idiots! I want my f-ing money!”  We ran across the street but had to split up as he ended up chasing me.  When I realized he wanted his WDYDWYD paper, I threw it on the pavement, still running.  I ducked into the closest shop I could find, and called my friend who was on the phone with the police.  They offered to send an officer over, but by that time the man had already ran away.

Anyway, long story short, we had a pretty close call.  After that we stuck to asking strangers in the Diddy Riese line.

Comment by Tony Deifell on January 23, 2011 at 2:10am
Kelsey, you're on a roll now... the first to get all three images in. I like the diversity of folks. What was it like asking folks?